Greece is a country with rich natural beauties and its people have a strong sense of hospitality, so a visit here offers a unique experience to every visitor. As a result of this, many hotel units have been constructed due to the increase in tourist traffic in recent years. Since 2004, Greece's hotel infrastructure has been considerably upgraded as a large number of hotel units across the country have been renovated, and new hotel units offering services of high standard have started being operated. As far as the number of hotel establishments operating in our country is concerned, 9.757 hotels operated in 2015 with more than 780.000 beds.The largest number of hotel units is found in the islands, and in particular in the South Aegean region, where the largest number of beds is concentrated (about 25%).

In island or continental areas with intense vegetation, the problem of a fire is possible; fire may also break out within the hotel premises due to various reasons of malfunctioning of a mechanism. This may result, in addition to nature disasters, to material damage in the units and put human lives at risk.

Our company manufactures firefighting systems in compliance with EN12845 standard or BFFU according to the design, predicts and prevents fires from happening in a hotel unit, which can prove to be fatal.

Another major problem observed in Greece’s hotel units of any region is the hardness of the water, causing problems of salts and blocking of pipes, wearing out of machines that come into contact with the water, poor texture in fabrics and clothes along with problems on human skin while showering. Our company provides the solution to the problem by providing fully automated water softening systems that protect water from salt, saving you money from service and equipment changes and reducing damage. 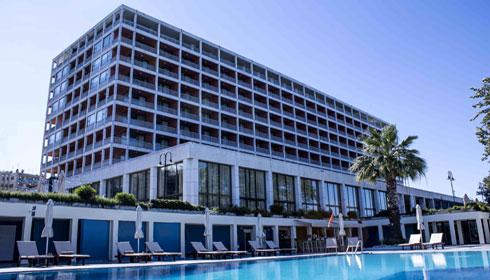 We also manufacture customised to every need reverse osmosis systems that transform even the hardest water into excellent quality drinking water while before the reverse osmosis it may need additional pretreatment such as deironing or dechlorination.

Also in island regions, there is acute lack of water from the network and high cost per cubic meter resulting in the need for large hotel units to exploit the seawater after specialized treatment, which is achieved by means of desalination systems customised the requirements of each unit.